Life Before Fame - Can You Match the Celebrity to Their Former Job Title?

In honour of National Careers week, we've been looking at the former job titles of some of the most recognisable people in showbusiness, politics and even royalty. Can you match each of these ten people with the jobs they did before they found fame? 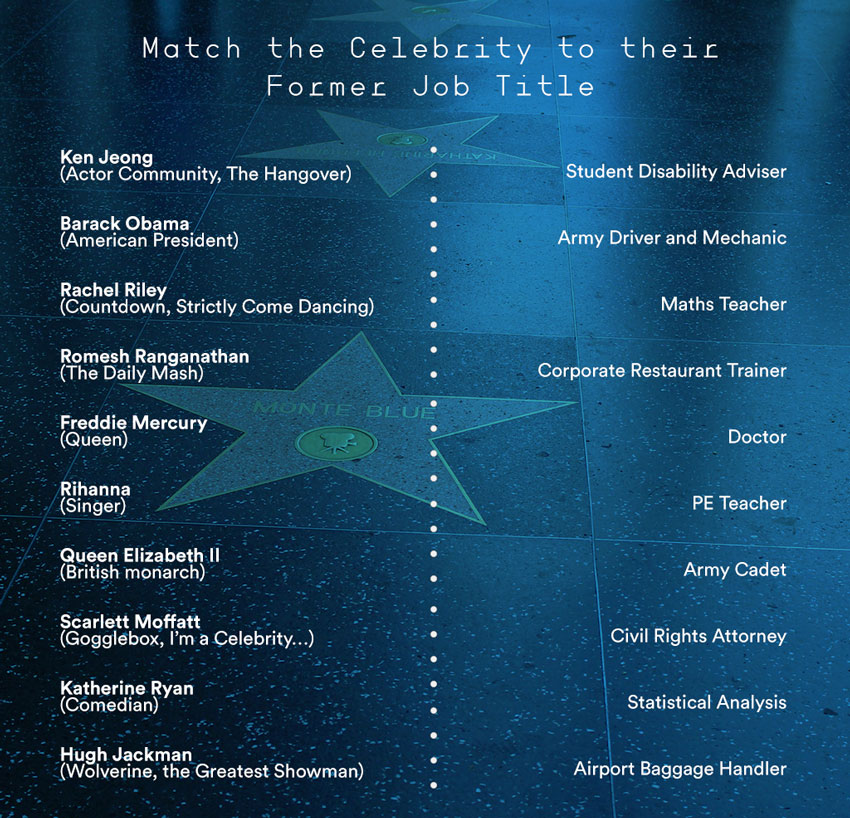 Ken Jeong had a successful American Football career during high school. After graduating at 16, he turned his attention to studying medicine and is a licenced physician in the state of California. All that medical knowledge is probably the reason he’s able to find his audience’s funny bones as a stand-up comedian and actor.

Obama studied Political science, specialising in International relations and English Literature. After graduating, he worked as a financial researcher, but five years later, he enrolled at Harvard Law School, beginning a legal career which saw him hold a range of job titles, including Lecturer of Constitutional Law and Civil Rights Attorney. Barrack Obama’s most recent job title, in full, is The 44th President of the United States.

Perhaps surprisingly, prior to becoming one of the most well-known and successful musicians in recent history, Rihanna was a cadet in a sub-military programme. During this time, fellow singer-songwriter, Shontelle, was her drill sergeant.

Since finding fame, Rihanna has released a number of songs with military-inspired titles, such as ‘SOS’ and ‘Man Down’.

The Australian actor and musician might be best known as Wolverine, a character who has earned him a Guinness World Record for the longest portrayal of a Marvel superhero. Or, if you’re a musical fan, you might have seen him in Les Miserables and The Greatest Showman.

However, before discovering his love for the arts, Hugh travelled from Sydney to Uppingham, near Leicester, to work as a PE Teacher during a gap year before attending university to study Communications.

After studying Graphic Art and Design at Ealing Art College, Queen frontman, Freddie Mercury worked as a Baggage Handler at Heathrow Airport, to support his dreams of becoming a successful musician. He met Brian May a year later and his career began to really ‘take off’.

He once reached the finals of the UK Freestyles Competition as a rapper named ‘Ranga’, but TV host, stand-up comic and regular panellist Romesh Ranganathan’s first love was maths. He studied the subject at Birkbeck College, University of London before becoming a Secondary School teacher at Hazelwick School, where he met his Drama teacher wife.

Romesh left the world of teaching behind to focus on comedy in 2012, but he often refers back to his interest in numbers and science.

Speaking of numbers, current Countdown co-presenter Rachel Riley is famous for her intellect and interest in both mathematics and science. In her television career, she has worked on The Gadget Show and It’s Not Rocket Science. Rachel also showed talent as a contestant on Strictly Come Dancing in 2013.

It’s hardly surprising that, prior to her debut on Countdown, Rachel worked as a statistical analysist while studying toward a Postgraduate degree in Mathematics and civil Engineering.

Born Elizabeth Alexandra Mary, Queen Elizabeth II has been known throughout the UK and most of the world since her birth. She has been the reigning monarch since 1953, but in 1945, she began training as a driver and mechanic and within five months, she was awarded the rank of Honorary Junior Commander in the Auxiliary Territorial Service.

No stranger to reality TV, Scarlett Moffatt has appeared on MTV’s Beauty School Cop Outs, Channel 4’s Gogglebox and Streetmate, ITV’s I’m a celebrity, get me out of here! However, her previous roles include ‘checkout operator’ at ASDA and Student Disability Adviser.

While a visit to Nottingham from stand-up comic and regular panellist Katherine Ryan would now form part of a sold-out tour of the country’s arenas, she was previously a Corporate Restaurant Trainer and was flown in from Canada to train new staff at a popular sports bar in the city.

Your Future Starts Here – What Will You Achieve in 2019?

We’re almost two months into 2019 and things have started to settle down. This means that, for many of us, the annual routine of making (and breaking) resolutions is well underway.

Do Something Different with your Career